Europe’s most innovative grassland farmers are set to receive international awards for their innovation and commitment to excellence in grassland. This initiative is part of the three-year Inno4Grass Thematic Network project, a €2 million project funded by Horizon 2020. The farmers receiving awards represent eight member states in Europe and are all excelling in grassland and grassland management despite differences in climate, systems and soil types. Each member state has recognised a farmer excelling in grassland through different competitions which took place in the member states.

The eight countries being celebrated at the Inno4Grass award ceremony are Germany, Belgium, France, Ireland, Italy, the Netherlands, Poland and Sweden, in which grasslands have a considerable share in the agricultural area and where production of dairy, beef and sheep from grassland is of major economic importance.

It is important for all partners to participate in this event for the promotion of good practices in European livestock breeding. Project coordinator Arno Krause, general manager of the Centre for Grassland in Germany, remarked: “I’m looking forward to presenting innovative grassland farmers around Europe with awards for their fantastic achievements in grassland. We call these farmers ‘lighthouse farmers’, they are shining lights in their countries, providing other farmers with guidance, ideas and knowledge in grassland, so it is important that we recognise their contribution to society in the award ceremony. This is one of the major achievements of the Inno4Grass project.”

The Inno4Grass programme strives to bridge the gap between practice and science communities to ensure the implementation of innovative systems on productive grasslands. The long-term goal of the project is to increase profitability of European grassland farms and to preserve environmental values across Europe. 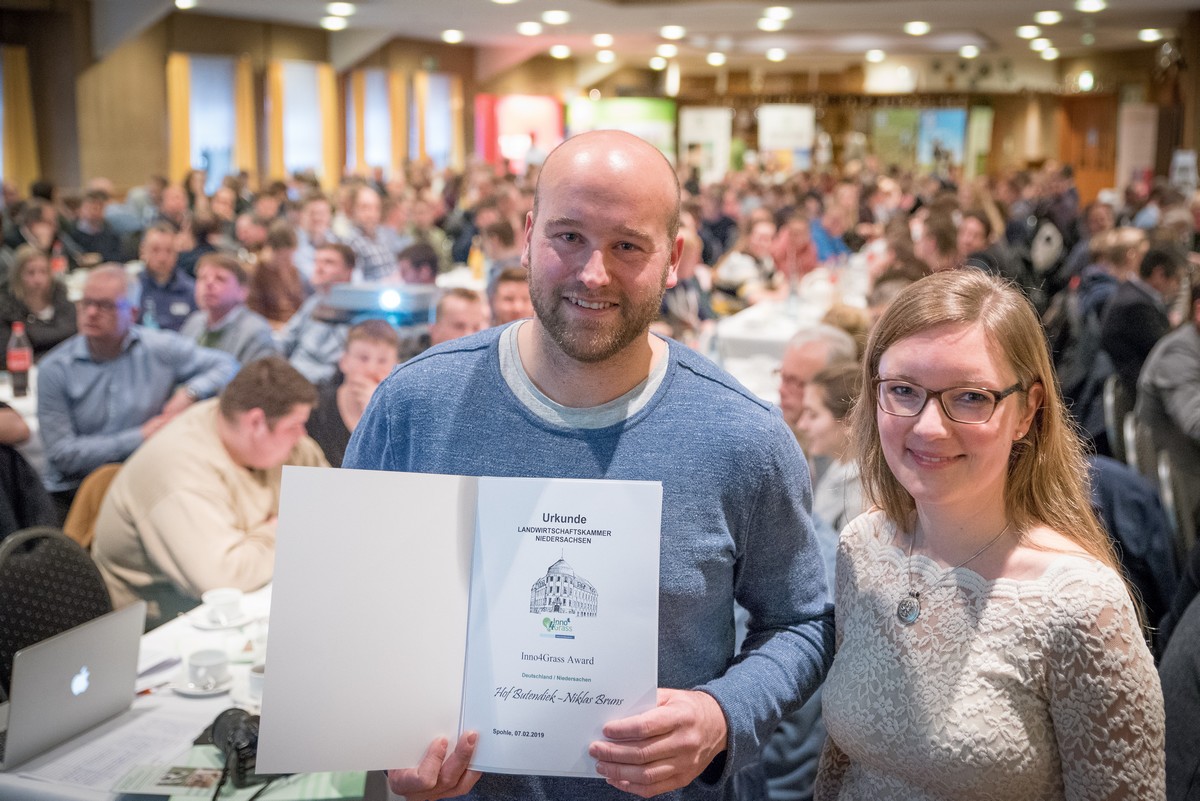 In Germany, the “Inno4Grass Award” recently went to the Bruns family from Biolandhof Butendiek in Seefeld, Lower Saxony. The farmers were honoured for their exemplary innovative spirit during the Grassland Day of the Lower Saxony Chamber of Agriculture in February 2019. Family member Niklas Bruns received the "Inno4Grass Award" on behalf of Felicitas Kaemena, head of the field research station for grassland and cattle farming at the Chamber of Agriculture. The Butendiek farm has been marketing its own cheese products in organic quality since 1987. This is based on 210 hectares of grassland and 180 cows. With the help of its own drying plant, high-quality hay is produced as basic fodder.
Photo: ©Wolfgang Ehrecke  http://www.hof-butendiek.de/

The father and son duo, Denis and Eddie O’Donnell are representing IRELAND at the award ceremony in Germany.  They are dairy farmers milking 316 cows on two farms. They consistently grow over 17 t of grass dry matter per hectare per year. Ireland’s Project Leader Michael O’Donovan commented: “The O’Donnell’s hosted a visit during the European Grassland Federation conference in 2018, which was received very well.” 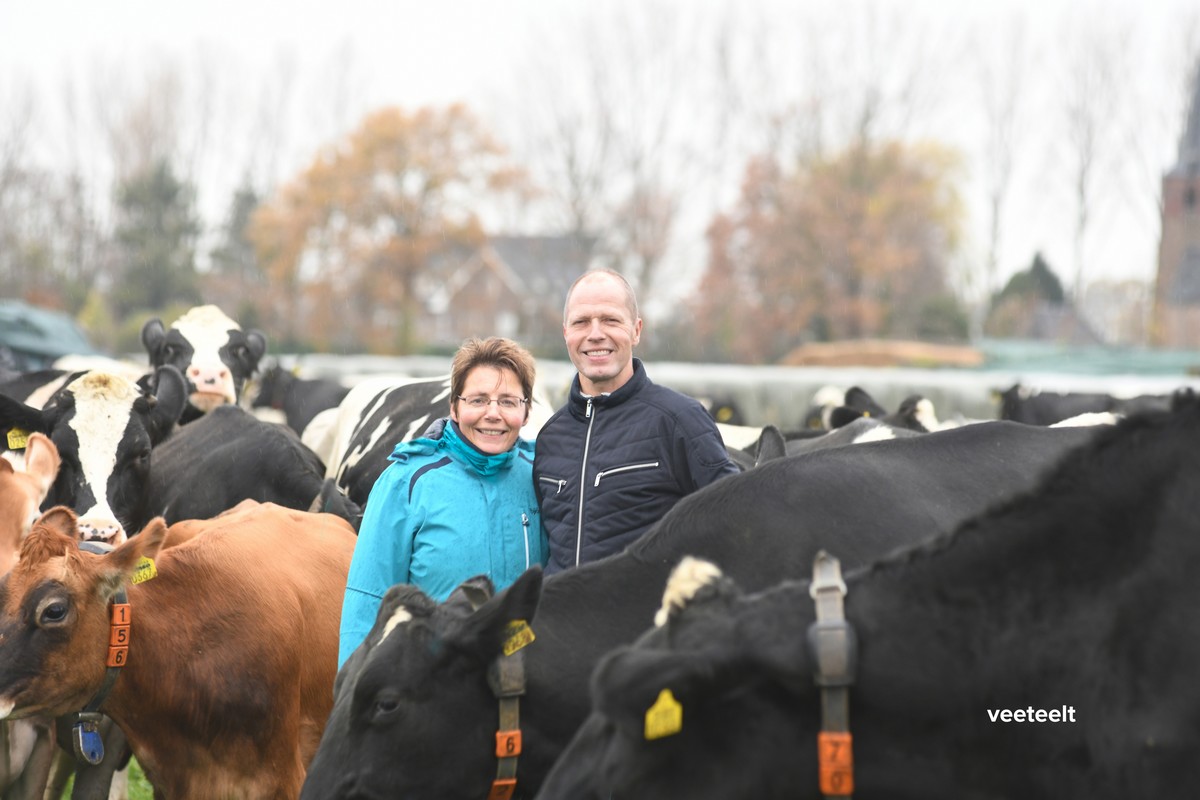 In the Netherlands, Hielke and Hanny de Rooij from Wadenoijen were voted "Best grassland farmer of the Netherlands 2018". According to Agnes van den Pol, the Dutch project leader of Inno4Grass, it is because, despite a small house plot, they still get a lot of fresh grass and lots of protein from their own land for their cows. Or as Hielke and Hanny de Rooij themselves say: “Grass is simply a fantastic product. It is still considered as a bulk product, but with grass you can steer much more than many farmers think.”
Photo: ©Veeteelt 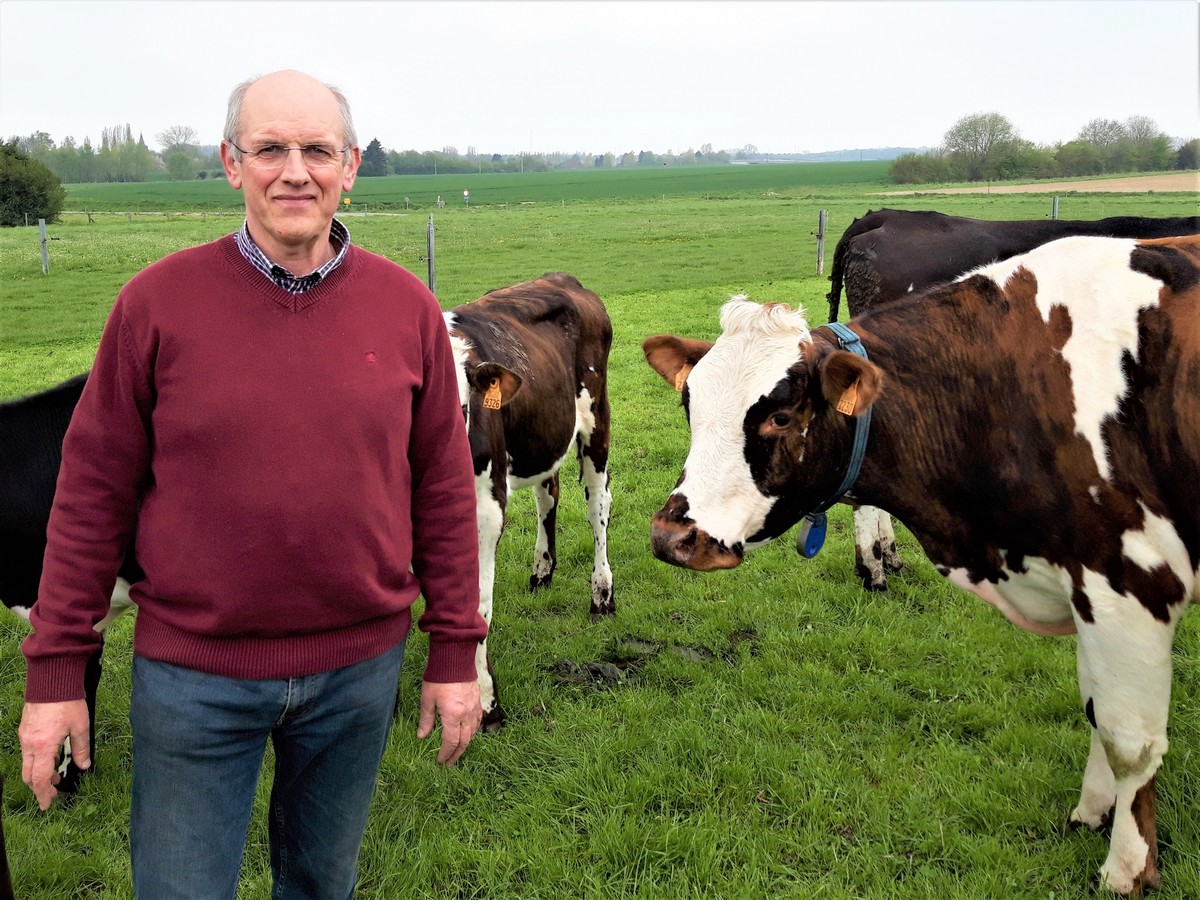 Jean-Marie Velghe is considered a pioneer of sustainable farming practices in BELGIUM. Notable examples for his efforts are developing no-till techniques, green manure, farmyard manure composting, herbaceous field margins, barn hay drying instead of grass silage, large forage self-sufficiency for cattle feeding and decreased pesticide and fertilizer use. The Velghe family is developing dairy product processing and marketing activities. In 2018, they won three prizes for their cheeses made from haymilk. 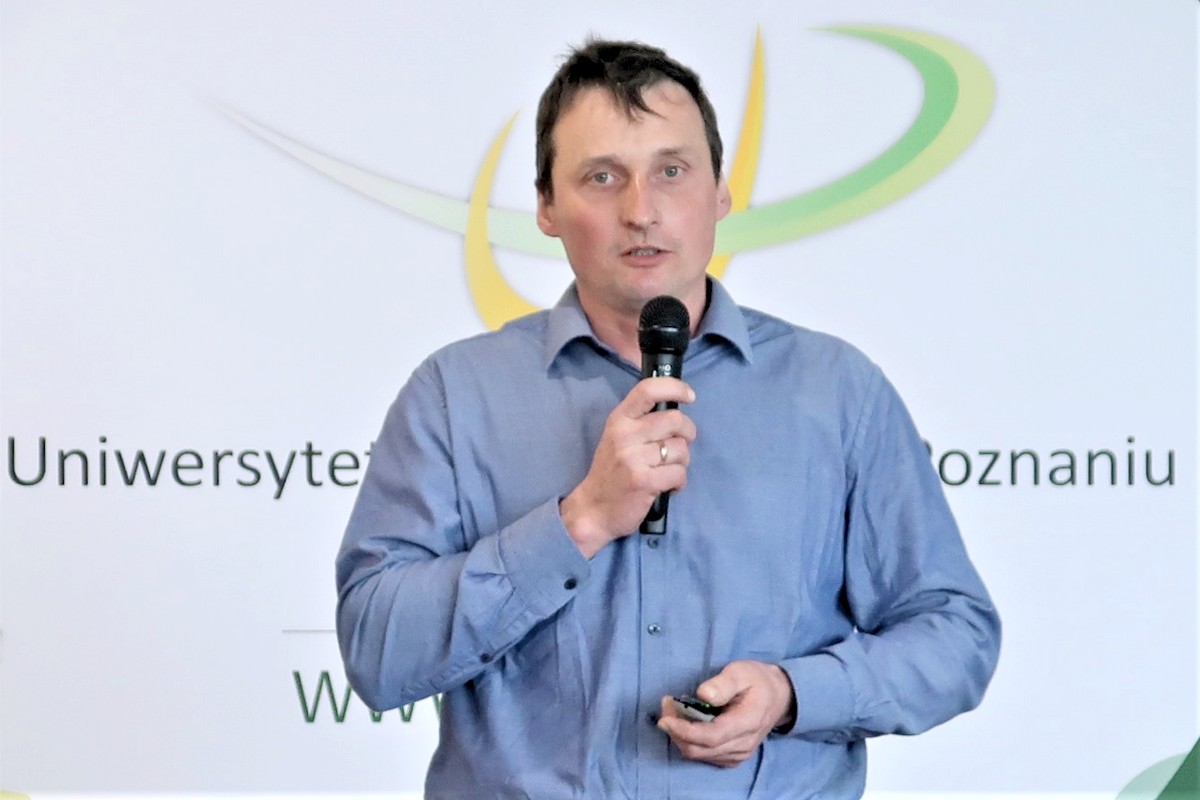 Poland will be represented by Mariusz Duda, who manages a 120-ha farm, with 45 hectares of grassland, which is the main source of cattle feed. Mariusz Duda was selected by 20 innovative Polish farmers participating in the Inno4Grass project. The innovation that distinguishes the winner, is a self-designed aerator for grassland on the peat soils with low porosity. With his broad agricultural knowledge and his knowledge of his own grassland habitat, the farmer puts modern technological solutions into practice, which directly affect the quantity and quality of the fodder obtained and the economic result of the farm. 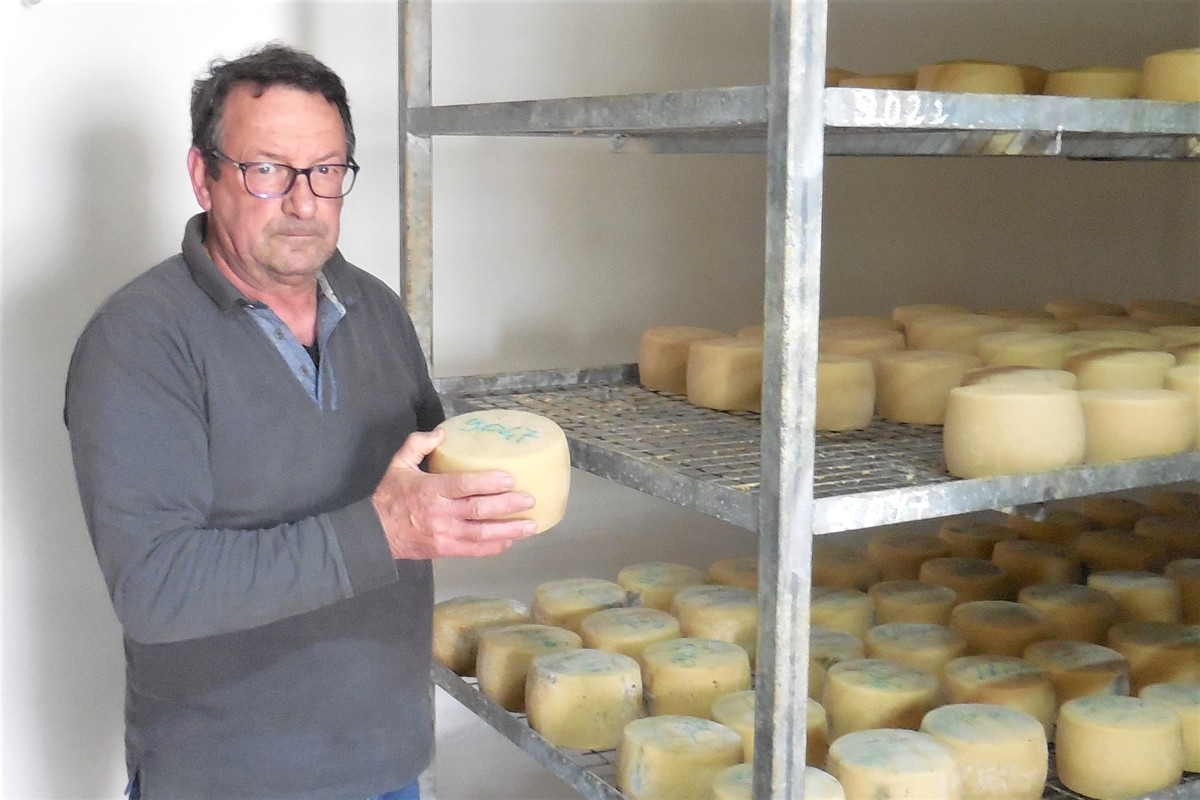 Gavino Pulinas from the Truvunittu farm, located in north-west Sardinia, will be the representative innovative farmer of ITALY at the Inno4Grass award ceremony. He breeds 560 dairy sheep in his 85-ha farm, where he replaced annual forage crops with improved permanent grasslands based on pasture legumes. Direct milk processing and cheese selling contribute to increase his farm sustainability. Gavino Pulinas is an excellent source of inspiration for farmers who intend to change a semi-intensive into an extensive farming system.

Béatrice and Dominique Bordeau are representing FRANCE at the Inno4Grass award ceremony in Germany. Located in Mayenne in the western part of France, they are part of the "Bienvenue à la ferme" (Welcome to the farm) network. They breed Normande dairy cows in a wooded organic farm that has been in the family for three generations. They are known as very innovative farmers and have already received a European award for getting certified as a pedagogical farm in 2006.
Photo: © Chamber of agriculture of Mayenne 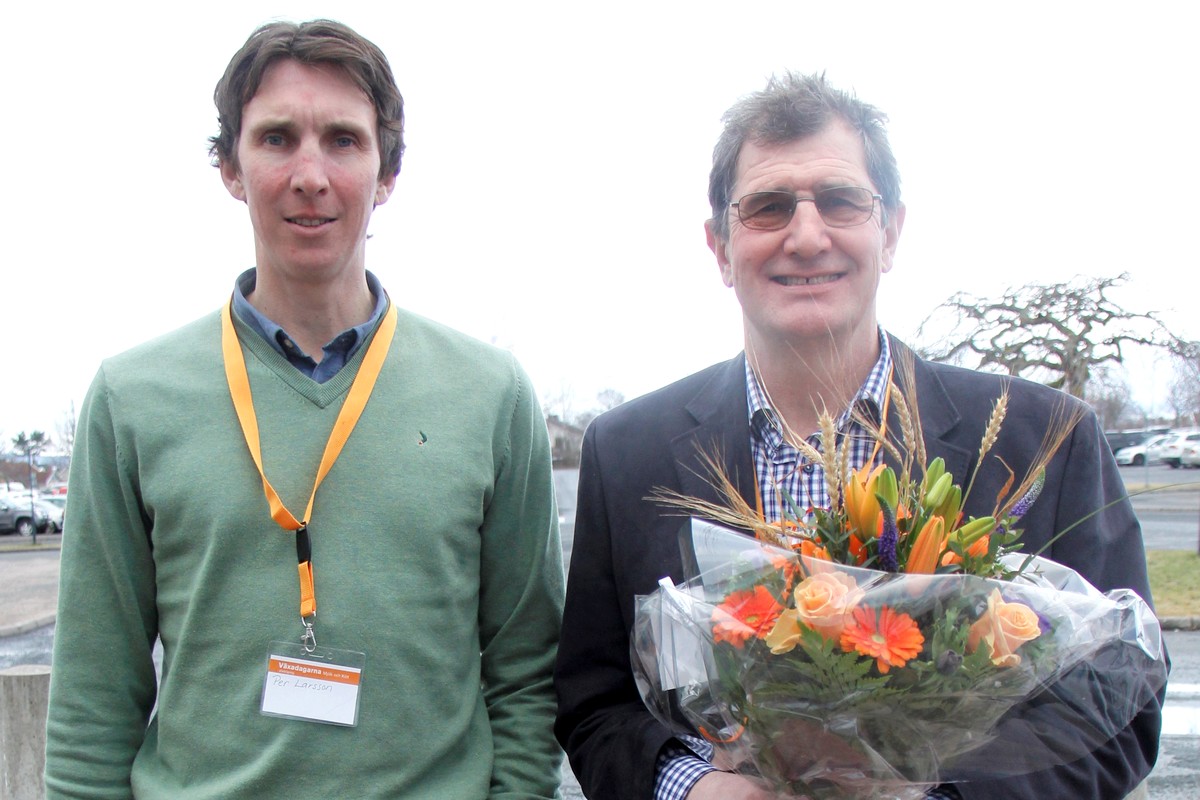 The father and son duo, Tore and Per Larsson, are representing SWEDEN at the award ceremony in Germany. On Kårtorp Farm with organic production, viable forage production has been in focus for many years, resulting in high-yielding leys and pastures with good profitability. The strategy is apparently simple: as good grass production as possible to optimize feed costs per kilo of milk. Approximately 13-15 forage samples are taken per year, both on fresh herbage and in silage to evaluate the effect of the seed mixture, to determine the cutting height and as a basis for feed optimization.

Press contact:
This email address is being protected from spambots. You need JavaScript enabled to view it.
Free downloads of these pictures on www.gruenlandzentrum.de

Inno4Grass is the acronym for „Shared Innovation Space for Sustainable Productivity of Grasslands in Europe”, an international and multi-actor project gathering prominent farmers‘ organizations, extension services, education and research institutions from eight EU countries - Germany, Belgium, France, Irleand, Italy, the Netherlands, Poland and Sweden, in which grasslands have a considerable share in the agricultural area and where production of dairy, beef and sheep is of major economic imprortance.

The collaboration between farmers, advisors and scientists is insufficient in the countries concerned. For this reason the latest results of research are not sufficiently put into the practice and valuable knowledge related to grasslands is discovered by practitioners at a very late stage. In addition information about existing novelties introducing at farm level is not disseminated effectively to the public in all Member States.

The overall objective of the project is to bridge the gap beteen practice and science communities to ensure the implementation of innovative systems on productive grasslands. The long term goal of the project is to increase profitability of European grassland farms and to preserve environmental values. The scope of Inno4Grass is fully in line with the outcomes of the EIP-AGRI Focus Group „Permanent Grasslands” that identified the need for innovations and the possible contributions of grasslands to economic performance and to sustainability of dairy, beef and sheep production in Europe.

The project significantly contributes to the successful deployment of existing reservoir of scientific and practical knowledge and stimulate its exchange between the regions and countries. This will be achieved through: 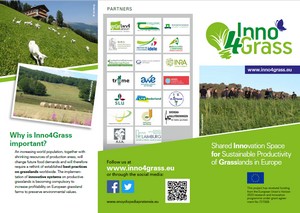 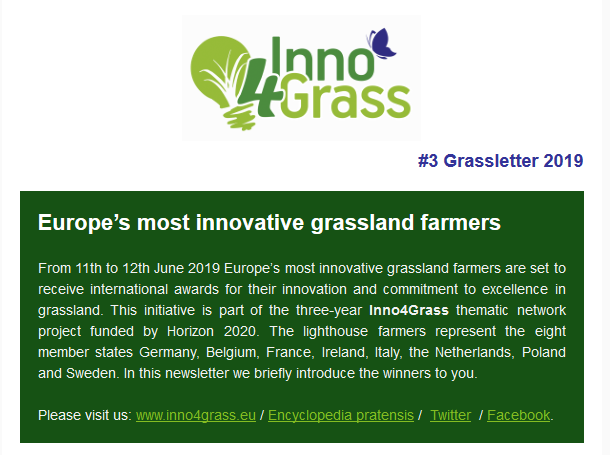 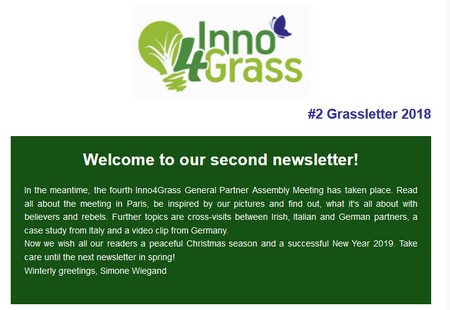 Follow this link to the very first Inno4Grass newsletter! 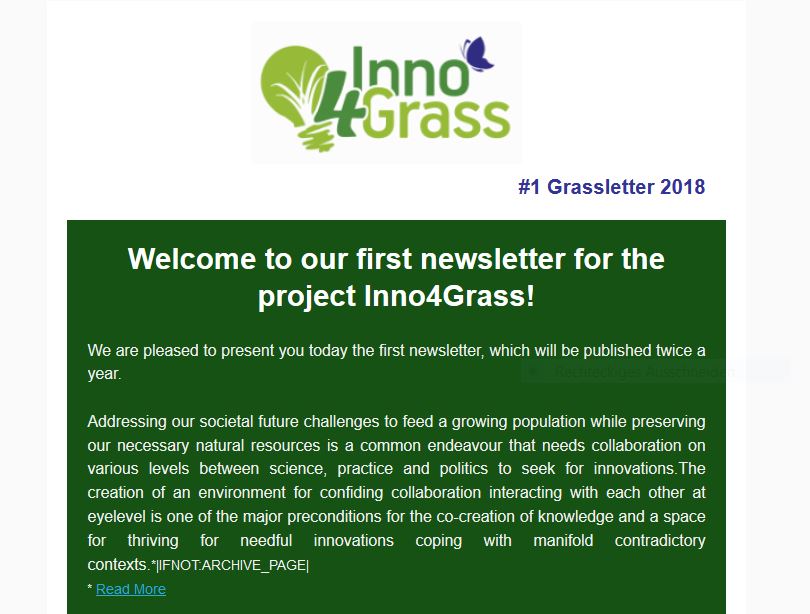 The network of 59 organisations have committed themselves to support the project.

Cookies make it easier for us to provide you with our services. With the usage of our services you permit us to use cookies.
More information Ok